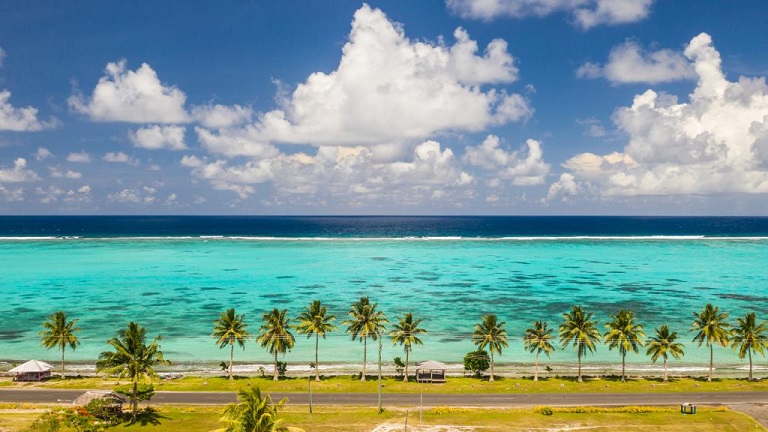 Samoa is a poster child for South Pacific beauty. Volcanic uprisings crafted much of this island’s dramatic topography: jungle-clad peaks plunge to the Pacific, and rugged rock islands rise from the sapphire sea.

Samoa is actually an archipelago of 10 tropical islands about halfway between New Zealand and Hawaii. You’re in the heart of Polynesia here, and the big hearts of the locals are a big part of the islands’ appeal.

Samoa also boasts some of the South Pacific’s most spectacular waterfalls, as well as flourishing coral reefs, wild beaches, hiking trails, picturesque crater pools, and surf breaks. Loll on Lalomanu Beach; hike lush rainforest trails; or take a dip in the To Sua trench, a picturesque crater pool ringed by tropical gardens. Staying on Samoa means soaking up an authentic taste of the South Pacific.

This is just a summary of what to see. Consult Apia, Savaii and Upolu for more detailed information.

A beach fale under the coconut trees at Salamumu beach

Below is just an indication of things to do in Samoa. For more detailed information, see Upolu, Savaii and Apia.

Eating is an extremely important part of Samoan life, as the size of many Samoans may suggest. They often take food with them when they travel. Samoan food is not highly spiced or seasoned. It uses ingredients that are relatively unfamiliar to most Westerners, such as breadfuit, taro (or talo), taro leaves, cooked green bananas and raw fish.

Unfortunately it is difficult to find these delicacies, maybe partly because western food is more “cool”, partly because the average tourist wants to eat what he eats at home. The usual things you get is more or less good imitations of western-style or Chinese food. The market in Apia is a good place if you want to try some of the local stuff. It’s also a good idea to stock up on fruit there before heading anywhere on the islands.

Most restaurants are casual and not too expensive. Places to eat are listed in the pages for Upolu, Apia and Savaii. Outside of Apia, most of the best places are associated with hotels or resorts.

The drinking age in Samoa is 21.

No significant gathering in Samoa, whether official or for pleasure, is complete without the ‘Ava (or kava) ceremony at the beginning. Kava’s biological name is Piper methysticum, which means intoxicating pepper. The roots of the plant are used to produce a mildly narcotic drink that is passed around meetings following strict rules. However, you do not need to participate in a Samoan cultural event to try it. On some days it can be purchased at Apia’s central market (marketi fou).

The local beer is Vailima [14] beer. It’s cheap and you can buy it everywhere.

Alcohol is plentiful in the bars. There’s not that much in most stores and it tends to be expensive. Le Well near the market in Apia (ask any taxi driver) has a good range at the best prices. For heavy drinkers, the cheapest liquor is generally vodka in large (1.75 L) plastic bottles. This may be bought from supermarkets and bottleshops and is also available in smaller 750 ml bottles for about 25 WST. Imported wines are generally very expensive, although not as expensive as in the restaurants.

The government shut down most of the popular and legendary bars and night spots in Apia in 2006, citing underage drinking, drugs, noise, and crime. They were reopened several weeks later. At the end of 2010 bars and nightclubs were supposed to close at 22.00 although some seemed to be able to evade this. There are lots of smaller bars and night spots to check out. Also every hotel has a bar as do most of the restaurants.

A fale in a village near Apia

Beach fales are an enjoyable and inexpensive way to stay in Samoa. A list can be obtained from the Samoa Tourism Authority (info@samoa.travel), but the best way to know where to stay is to ask other travelers. Samoa is not very big and tourism is limited, so you will bump into the same people once in a while making it easy to exchange information.

With the explosion in accommodation it is now less necessary for those wanting to visit the remoter parts of Samoa, particularly Savaii, to stay in villages, which was fairly common in the past. However, this is still possible. If you want to stay in, or even just visit, a village it is important to remember not to offend local culture. See Respect, below.

There is also a good range of resorts, hotels and guest houses in Samoa. A large number have been constructed in recent years.

Accomodations are listed under Apia, Upolu and Savaii. Please do not list them here.

Samoa is a generally safe destination. Crime rates are low and people are very helpful and friendly. Items do, sometimes, get stolen. With sensible precautions, however, the threat of this happening should be minimal.

Free roaming dogs can be a safety problem in the capital Apia. The Government of Samoa (GoS) passed the Canine Control Act in 2013 as an initial step toward addressing dog management. Most dogs ignore you and don’t see you as a threat if you ignore them.

As of January 2015 there is an outbreak of Chikungunya in Samoa. This virus is transmitted by mosquitoes. There is no vaccine and no cure. Take precautions to prevent mosquito bites (nets, repellent, long sleeves and pants, rooms with A/C.)

Samoa is a malaria free zone. However, there are occasional outbreaks of Dengue Fever and so precautions should be taken such as using mosquito nets and insect repellent. Note that the mosquito that transmits dengue normally bites during the day.

There are no known poisonous animals or insects on land, although centipedes can give you a very painful bite. In the water beware of purple cone shells, sea urchins, fire coral, etc. If not using fins, wearing footwear while snorkeling is highly recommended.

Some travellers have reported a violent allergic reaction with the ceremonial drink kava. Symptoms include a very obvious rash and swelling to the neck and face area, sweating and discomfort. Medical attention should be sought immediately and a prescription for Prednisolone usually does the trick. It takes from 12-24 hours for the effects to noticeably subside.

There are two hospitals in Apia and one on Savaii at Tuasivi, a couple of miles north of the ferry wharf at Salelologa.